The tradition that people have been continuing to carry the torch,

craftsmanship that have been handed down for centuries,

splendid culture of making things that have been cherished since ancient times...

Even if the genre is different, you'll be surprised at how many such beautiful treasures as well as Japanese Urushi lacquerware you can discover in our daily life. This time as one example of these, let us share with you about “Mizuhiki” with more than a 1,000 year history, and which is used for our gift wrapping decorations.

Mizuhiki is decorative cord made from Japanese Washi paper by shredding, twining, glueing and drying. There are different stories about the origin of Mizuhiki, but one of them dates back to 6-7c. When “Ono-no-imoko” who was the first ambassador came back from China, the gift he brought back was tied with red and white linen cords wishing safe travels. This custom was then practiced in Japan as well for the gift to the imperial court, and time passed to Muromachi era (15-16c) , linen cord was substituted to Japanese washi paper. Since Washi paper was really exclusive and expensive products and also Mizuhiki was regarded as sacred at that time, it was used only for a special item such as a gift to the emperor. In the Edo period, it came to stay among the public and later it has been widely used for decoration as well as gift wrappings. Today we can see various colours and materials of Mizuhiki, and at the same time the usage has expanded to accessories, ornaments, table or even food decorations. 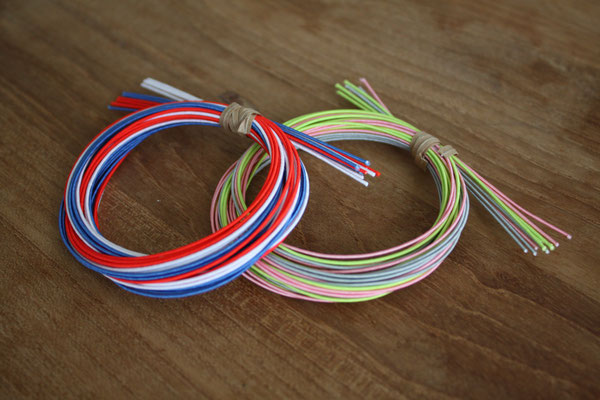 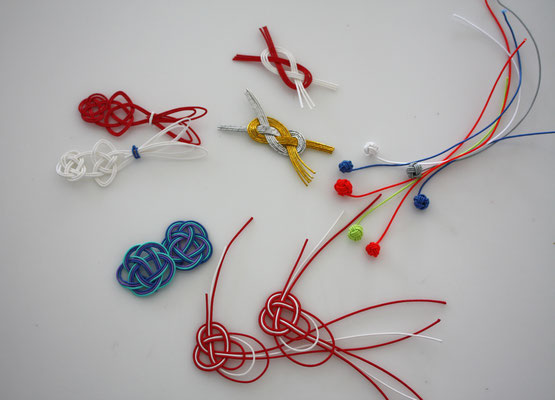 - Where is Mizuhiki made?

Iida city in Nagano prefecture and Iyo in Ehime prefecture are the two major production areas today. Especially Iida city that occupies 70% of the production is said to have been inherited the traditional technique since the 1600s. Iida city originally boasted paper and  “Motoyui” industry which is the paper cord for tying a topknot because of the rich resource of paper raw materials “Kouzo”, good quality water and the weather. In response to changing times they shifted to Mizuhiki production instead by employing the same technique. Although its scale is small, the demand for “Motoyui” still exists for Sumo wrestlers and Kabuki actors' wigs. In addition to these areas, Kyoto and Kanzawa are also known as a famous Mizuhiki works area.

- How is Mizuhiki made?

The length of Mizuhiki is basically 90cm and the thickness is roughly the diameter of 1mm.

First cut out in stripes from a big roll of Washi paper, and twisting a few of them to make a long cord, then starched to give it stiffness. After drying them, they’re coloured variously. They used to make all the processes by hands,  but now most of the processes are mechanised, but Mizuhiki works are individually tied by craftsmen.

In Japan there has been a thought known as “Kibutsu-chinshi” which implies conveying the feeling by giving gifts or things rather than words. “Mizuhiki” is a good example of this customs. “Mizuhiki” has been tied to make various patterns depends on the occasion such as celebratory event wishing happiness or sympathy event sending messages of condolence. With the single knot, people have tried to communicate their thoughts.

There’re different meanings depends on the way of tying. Here are the basic 3 different types of knot;

Since this knot can be retied many times, for celebrations that one would wish to be repeated such as childbirth, admission, promotion and so on.

Since this knot is tied tightly in the middle and hard to retie, this is for a celebration that one would not wish to be repeated such as a wedding, a celebration after recovering from sickness, sympathies and so on.

This is a type of Musubi-kiri knot that cannot be untied by definition. People use this knot in both celebratory and non celebratory situations. With the meaning that the knot makes even tighter by pulling both ends, it can be used wishing a life-long friendship and so on.

Based on these traditional knots, many different kinds of design by adding a modern twist are seen in various areas these days.

For us Japanese as an ancient tradition, tying has meant to connect with the hearts of others, build and promote a bond with others. From the expression “tie the knot” meaning "to get married",  "tie" in English might also have the similar meaning of connection between people.

Sending a gift is one of the important communication tool in our modern society where we have various convenient communication methods such as telephone, email, SNS and so on. When you choose the gift for your loved one, you think of him or her imagining their happy faces, likewise the person who receives the gift might ponder how much time you spend on choosing it for him or her. This is a kind of communication requires imagination and consideration. It may not sound reasonable and that’s why it makes valuable and graceful.

Why don’t you enjoy spending time to choose a gift for your special person and putting your thought into it? Do let us help you with our Mizuhiki wrapping depends on your occasion.

Check another posts about Japanese culture